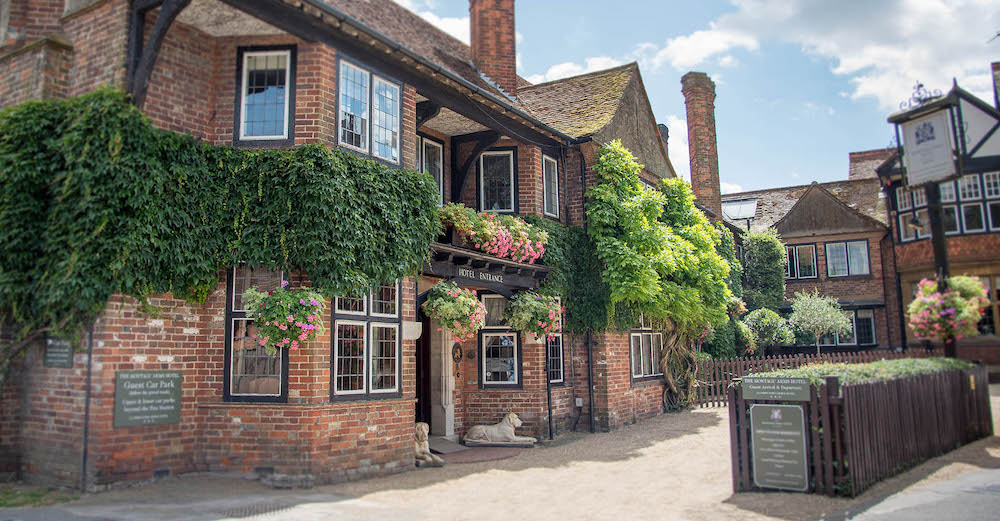 Since the 16th Century there has always been an inn on the site of the Montagu Arms. Originally a meeting place for farmers and parish officers the inn, then known as ‘The Ship’ and then ‘The George’, was very much the heart of the picturesque Beaulieu village.

The inn was a hub for timber auctions and lectures, with its own farmland a cattle market was held at the inn every year until 1809. The annual Beaulieu fairs originating from 1607 were also held at the inn as well as weekly markets.

The original building front was demolished in 1887, with the new arts and crafts style building, incorporating Monty’s inn, was completed in 1888 under the direction of local architect W. H Mitchell.

In 1926 a new north-east wing was added by Bizan and Fletcher to form the hotel as we know it today.

In 1943 the Montagu Arms Hotel was one of a number of public buildings used by the home-guard as a firing position in the event of invasion during world war 2. A scrapbook of top secret orders, letters and hand drawn maps by war-time Home Guard commander, Sir Morgan Crofton, revealed a rare insight into the real ‘Dad’s Army’ of the New Forest.

The current owners acquired the hotel in 1970 and it has remained a cherished privately owned hotel ever since.

Client
The Montagu Arms Hotel
Date
2018
Services
22 Bedrooms, Michelin Star Restaurant
Our Role
IT, Telecoms, Wi-Fi, CCTV Support
Are you worried about your IT security?

Book your free of charge IT security health check today

“When we needed some outside expertise Hotality were recommended to us by another of their customers. I
cannot praise them enough – they even liaised with the software vendor on our behalf after the project had
finished and came up with a solution.”

“Hotality were great in helping us migrate the email in our hotels to Office 365.”
“We’ve worked with the guys at Hotality for more than 3 years, and during that time their professionalism and
experience has been second to none.”

“Choosing Hotality to provide my IT Support has been one of my better decisions.
When we wanted to update our guest Wi-Fi, they were able to design and install a solution throughout the
hotel, which gave our guests a much improved experience.”

“For the past couple of years Hotality have performed our IT Support. During this time they have given us a much more
stable network, and enabled us to offer our guests better Wi-Fi throughout our other properties using a point-to-point
Wi-Fi solution. Hotality have been fantastic, always on hand when we’ve needed them and would highly recommend.
Hotality are the ideal IT partner for any company.”

“Since we chose Hotality to do our IT, we’ve had far less issues than we used to have.
They are always on-hand 24×7, whenever we need them.
I like just having a single provider to manage our IT systems, CCTV and phones.
Would I recommend Hotality? Absolutely.”

Looking for a Hospitality Technology Partner?